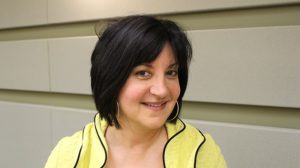 Francesca Grosso grew up in Sudbury and is the daughter of the late Dr. Roberto Grosso. (Matt Durnan/Sudbury.com)

By Matt Durnan for sudbury.com

Health Sciences North recently featured Patients Canada vice chair Francesca Grosso in the speakers’ series. As a former policy director with the Ministry of Health, Grosso was very vocal with how the Ontario Liberals handled the health care system, and was one of the people involved in designing the PC Party’s health care platform.

“I’m not sure what I’d be talking about it if the NDP had won the election,” said Grosso. “With a new government, people want to know what will change in health care and that’s what I’m going to be discussing.”

Grosso points out that with the Liberals at the helm, the health care system has been well-funded, in spite of contrary opinions. Where the issues lie however, is where the funding has been allocated.

“The past government has done a good job of ensuring the dollars were provided to the health care budget,” said Grosso. “The concern is that the dollars may not have their way to actual services — care, frontlines, doctors and nurses — I believe the funding has largely been going to structures, administration and management.”

Grosso says that action plans like the Patients First legislation don’t actually focus on patients at all, but rather a massive restructuring of local health integration networks (LHINs).

“There’s this idea that moving the chairs around the executive table is somehow going to trickle down,” said Grosso. “Every time we do a restructuring in our health care system, it’s very expensive and it’s expensive in terms of focus. People are no longer focusing on the patient, they’re worried about who they’re reporting to and where their funding is coming from.”

In line with the Speaker Series’ overarching goal of gathering feedback from the community as part of the hospital’s strategic plan process, Grosso explains that there needs to be a shift from the top-down approach that has been taken in Ontario’s health care system, and put more focus on gathering input from the front lines of the system.

“We should be much more concerned about streamlining processes and ensuring that the money is on the front lines, and that the ideas being generated on how best to fix the system are with the input of patients and frontline providers,” said Grosso.

HSN Board Chair Nicole Everest pointed out that the board hopes most job cuts will come by way of attrition and retirements. In a news release, Everest indicated that 184 HSN employees are eligible for an unreduced pension by 2019, saying funding has to keep pace with expenses.

“I think it was very wise what HSN did. I think that this is going to have to, unfortunately, be an exercise that takes place all across the health care system,” said Grosso.

While there is some uncertainty and trepidation among health care workers surrounding a PC government taking the helm, Grosso says that she doesn’t belive that Doug Ford is interested in cutting services.

“I see a system that will cut down on the levels of bureaucracy and be far more responsive to local realities,” said Grosso. “I was very frustrated during the election to hear a lot of politicians speak about, if he wants to find this kind of money it’s automatically going to mean a cut to services, I don’t agree with that at all.

“I would argue that (HSN) has added capacity and services because it has managed to take out some of the administrative functions that were probably redundant and probably not necessary. Doug Ford has said that we probably need more doctors, more nurses, and more personal support workers.”