Sudbury Living Magazine March 17, 2020 Arts No Comments on Looking for something to do: Watch made in Sudbury movie 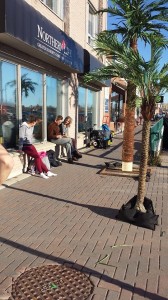 Ethan Hawke stars in the film “Born to be Blue,” about jazz legend Chet Baker. It was filmed in Sudbury in 2014. Some scenes were filmed at the Towne House, and along Elgin Street, including right in front of the Northern Life office. Supplied photo.

Born to Be Blue is a 2014 internationally co-produced drama film directed, produced and written by Robert Budreau. The film stars Ethan Hawke and Carmen Ejogo. It was shown in the Special Presentations section of the 2015 Toronto International Film Festival.[7] The film is about American jazz musician Chet Baker, portrayed by Hawke.

The film is described as “semi-factual, semi-fictional”.[8] Variety’s reviewer, Andrew Barker, noted that the film is “about a character who happens to share a name and a significant number of biographical similarities with Chet Baker, taking the legendary West Coast jazz musician’s life as though it were merely a chord chart from which to launch an improvised set of new melodies”.[2] Set largely in 1966, Baker (portrayed by Ethan Hawke) is hired to play himself in a movie about his earlier years when he first tried heroin. He romances actress Jane Azuka (a fictional character, a composite of several of Baker’s women in real life, portrayed here by Carmen Ejogo) but on their first date, Baker is attacked by thugs and his front teeth smashed. As Baker recovers from his injury, his embouchure is ruined and he is unable to play trumpet any better than a novice. Meanwhile, he must answer to a probation officer, and ensure he is employed, while sticking to his regime of methadone treatment.

The jazz score to the film was created by composer and pianist David Braid[12] The audio for trumpet performances in the film was done by Kevin Turcotte.[13] Hawke had taken trumpet lessons from Ben Promane,[14] and requested video of Turcotte recording, in order to mime the playing during the shoot.[15]

Born to Be Blue received positive reviews from film critics, with Hawke’s performance receiving praise. It holds an 88% “Certified Fresh” rating on review aggregator website Rotten Tomatoes, based on 100 reviews, with an average rating of 7/10 and critical consensus being: “Born to Be Blue benefits from a highlight-reel performance from Ethan Hawke and an impressionistic, non-hagiographic approach to Chet Baker’s life and times”.[21] On Metacritic, the film holds a rating of 64 out of 100, based on 32 critics, indicating “generally favorable reviews”.[22]

Warner Music Canada released a collection of 14 tracks, with 12 arranged or composed by David Braid and 1 track each by Charles Mingus and Odetta. Two tracks feature Hawke’s vocals.[23][24]