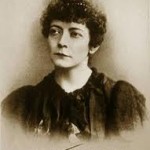 Kit Coleman was a remarkable woman who was a journalist and war correspondent at a time when women were usually wives and mothers and seldom ventured far from their place of birth.

Her legal name was Catherine Ferguson and she was born in Ireland on Feb. 20, 1856. She married three times, the last time in 1898 to Dr. Theobald Coleman, a Canadian, whom she met in Washington.

It was during this last marriage that she resided in Copper Cliff from 1898 to 1904 with her physician husband who was employed by the Canadian Copper Company. When she married Theobald Coleman, her reputation as a journalist was already well-established.

She wrote about her experiences in the pioneer town of Copper Cliff for The Toronto Daily Mail. The high point of her career occured during the Spanish-American War of 1898 when Coleman became the first accredited female war corresponded by the American government. She insisted on travelling to Cuba to cover this war in July of 1898. Her intense accounts of the aftermath of the war and the human casualties made her famous.

Coleman strongly believed in equal pay for equal work. She did not hesitate to express her advanced opinion on this and other important women‘s issues such as the matter of wife abuse, and in general the plight of women in her day. Coleman spent most of her 25 years as a journalist engaged in carefully negotiating what was considered appropriate behaviour and what felt to be too daring.

She also wrote with irreverent wit in the early women’s pages. Her rebelliousness was evident in that she expounded on politics, business, science and religion although her editors required her to record matters of fashion, housekeeping and beauty products. It was the accepted opinion of the times that women readers would only be able to relate to those “fluffy” topics. Her columns became wildly popular and eventually became a syndicated column published by various newspapers.

Coleman died of pneumonia in Hamilton in May of 1915 at the age of 59. Journalist Mick Lowe researched Coleman’s experiences in the Sudbury area. He wrote historical fiction based on his research, and it was published in Northern Life in 2000.

Patricia Mills
Founding Publisher
Shopping in the Windy City has a price
April 4, 2016