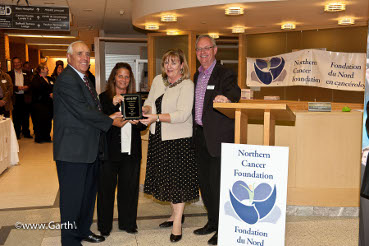 Twenty years and $25 million after the Northern Cancer Foundation was founded, northerners continue to make it their charity of choice. And it’s good to know 100 percent of the funds raised for the foundation by generous donors, supporters, communities and organizations throughout the north remains in Sudbury to support research, equipment and patients’ needs.
“There’s barely a family in northeastern Ontario that hasn’t been touched by cancer, either in a family member, a co-worker or a social circle. Many of these, having seen firsthand the excellent services we provide, go on to be active fundraisers and supporters. It’s a continuous circle of giving and caring,” says foundation director Tannys Laughren.

“Four major annual fundraisers are co-ordinated by the foundation: The Motorcycle Rally for Dad, the Strokes for Hope Golf Tournament, the Breast Cancer Luncheon of Hope, and EZ Rock Radio’s Radio-Thon for Cancer. These events are always well-attended, well-supported and continue to grow year after year.

“The foundation’s community partners have also been invaluable in raising funds for us. Groups like Miners for Cancer, College Notre Dame, Lockerby Composite, Shoppers Drug Mart, as well as the local Legion branches are important and generous contributors to our foundation,” adds Laughren.

The history of the cancer centre itself is a story worth repeating. It showcases the tenacity of one amazing woman. When Maureen Lacroix decided Sudbury and Northern Ontario needed its own cancer centre, there was no stopping her.

As an emergency-room nurse when cancer treatments were dispensed in the emergency room and as a service-to-patient volunteer for the Canadian Cancer Society, Lacroix saw the hardships experienced by northern cancer patients who had to travel to Toronto for treatments.

“Many refused to travel to Toronto and did poorly, while those who did go felt isolated and lonely,” she recalls.

While doing research on the project, she came across a government report on cancer treatment and care in Ontario.

“One sentence jumped off the page at me,” Lacroix says. “It stated Northern Ontario should have its own cancer care facility and that it should be located in Sudbury. It was a real game-changer, because this report, which had been shelved for years, had been prepared by the provincial government. It meant to me that they had seen the need too. That started the ball rolling and eventually, with some of the north’s most dynamic leaders, lobbying and planning began.”

Former MPP Jim Gordon, single-minded like Lacroix about the need for a cancer care facility, later accompanied Larry Grossman, who was then minister of health, to Sudbury to make the historic announcement. The ribbon for the new centre was cut in 1991.

The Northern Cancer Research Foundation was established in 1992 after founding director Robert Corringham recognized research was a key part of cancer care and that there was a need for a foundation to fund that research.

“Contributions were coming in at the time and funds were being disbursed to where they were most urgently needed, to patient support and equipment. We needed a better focus. Gerry Lougheed Jr. was the foundation’s first chair,” remembers Lacroix.

The stories of the foundation and the cancer centre are stories of northern tenacity, know-how and amazing generosity. Supporters can participate in the circle of giving by donating directly to the foundation online at ncfsudbury.com or by phoning 705.523.HOPE.

Cranberries are good for you

Anna Barsanti
Blogger
Leila and I went to PEI
August 15, 2017