Vicki Gilhula August 26, 2017 Our Town, Sudbury's Stories 1 Comment on The woman behind the man who named Sudbury 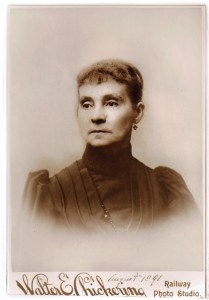 Students of local history know Sudbury was named by CPR construction superintendent James Worthington after his wife’s hometown in rural England, but little has been written about Worthington’s wife.

British researcher Valerie Herbert rummaged through census information in England and Canada to put Mrs. Worthington’s story in the history book for the Sudbury Museum Trust in Suffolk.

She discovered “Mrs. Sudbury” is Caroline Frances Hitchcock Worthington. Caroline was 25 when she crossed the Atlantic in 1858 with her sister Emily, in search of a better life in Canada. Perhaps the sisters were also looking for a little adventure and romance.

Census information from June 1841 in the county of Suffolk, identifies Caroline F. as the second daughter of tailor John Hitchcock. John later became a “relieving” or relief officer who dealt with the community’s poorest citizens.
“It is likely Caroline was among the many young women who emigrated to Canada seeking work as housekeepers,” writes Herbert.

Eventually five Hitchcock siblings came to Canada. Several members of Caroline’s extended family, who remained on the other side of the pond served as mayor of Sudbury, Suffolk, during the 20th century.

A year after coming to Canada, Caroline became the second Mrs. James Worthington. Worthington, who was 10 years older than Caroline, was a widower with children. The couple married in Toronto on March 16, 1859. At the time, James and his brother owned a construction company in Toronto. 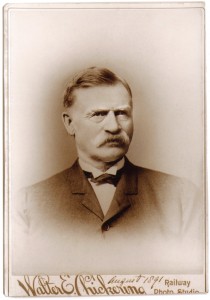 Herbert suggests Worthington may have originally hired Caroline as a housekeeper to look after his children. The Worthingtons were married for 40 years, yet there is no information regarding any of their own children.

According to the Canadian census of 1881, the couple had moved from Toronto to Brockville. James was one of the investors in the Canadian Central Railway before it amalgamated with the Canadian Pacific Railway.

In 1883, Worthington and the CPR railway crew reached the lumber camp of Ste-Anne des Pines. With the stroke of a pen, he put Sudbury (Junction) on the map.

Shortly after supervising the construction west from North Bay to Sudbury, Worthington, who was 61 at the time, was replaced as engineer. orthington resigned after a disagreement with William Van Horne, the railway builder and later president of the CPR, according to the Dictionary of Canadian Biography Online.

Worthington was in the right place at the right time. He invested in promising mining properties and gave his family name to a community and a mine.

By 1891, according to Toronto census information, the Worthingtons were living in Swansea, a community in the west end of Toronto.

“He and Caroline were living comfortably, cared for by a cook, housemaid and coachman,” writes Herbert.

Worthington owned a bolt company (Ontario Bolt Works) that employed a large workforce. He was one of the first landowners in the area and there is some evidence he may have named the community after the Welsh city. Stelco eventually bought the bolt company and ran the operation until it closed in 1989.

Worthington died in 1898. Caroline lived in Toronto with several of her siblings until her death in 1905.

There is no record that Caroline ever visited our Sudbury.

“Canada’s Sudbury could not be more of a contrast to the little English town in its lush valley on the boarder between Suffolk and Essex,” writes Herbert.

Sudbury (pop 20,000) is a small, ancient town, which is now part of the administrative district of Babergh. It is located about 97 kilometres northeast of London and its history dates back to the Saxons.

The first written record of the town is in the Anglo-Saxon Chronicles of the eighth century when the town was listed as Suthberie. The town of Sudbury is listed in William the Conqueror’s Domesday Book of 1086.

The woollen industry developed in the late Middle Ages. Later, skilled Flemish weavers settled in the area and this gave rise to a silk weaving industry.

The famous painter, Thomas Gainsborough was born in Sudbury in 1727. Artist John Constable was also born in the area. Both artists are known for their paintings of the romantic English countryside and villages of Suffolk. Sudbury has been used for television locations, most significantly for BBC’s Lovejoy.

During the Second World War, the Suffolk Regiment worked closely with Canadian troops to help break through the German line at Cassino, Italy. Members were asked to wear the Canadian maple leaf in recognition of the Canadian’s support.

The City of Greater Sudbury is the largest offspring of Mother Sudbury. But there are others. Sudbury is the name of a suburb in northwest London. The name means “the southern manor” according to the Brent Heritage website.

In the early 17th century, Puritans left Sudbury, Suffolk, and settled in Sudbury, Mass. Today, this Sudbury is a largely white and wealthy suburb of Boston.

The Sudbury River is located in Middlesex County in Massachusetts.

Sudbury Park is a local community park located on Skaha Lake in the community of Penticton, B.C. For wind surfers and kite boarders, Sudbury Beach is the main point of entry to access Skaha Lake

Sudbury Reef, off shore of Queensland in northwestern Australia, is located near Fitzroy Island, a paradise island. Fitzroy was named by Capt. James Cook after Augustus Henry FitzRoy, who was prime minister of Britain at the time. His formal name was the Duke of Grafton, and he was Baron of Sudbury. FitzRoy is buried in Euston, near Sudbury.

Euston Hall has been home to the dukes of Grafton for more than 300 years.

James Worthington is a name in the history book. Now we have his picture.

Historians tell us Sudbury was christened by James Worthington, a railway engineer when the iron horse cut its way west into northeastern Ontario. He named the new town after Sudbury, Suffolk, England, the hometown of his second wife, Caroline Hitchcock.

In the Spring 2011 edition, Sudbury Living published a feature, inspired by an article written by an English historian about Caroline Hitchcock. It caught the attention of one of Hitchcock’s descendents, Ann McMillan, who lives in Kelowna, B.C.

“Caroline Frances Hitchcock Worthington was my great-great-grandfather’s sister,” she wrote. At the time, she promised to look for a photograph of the Worthingtons.

Earlier this year, she sent another email. “This December an old photo album which belonged to my great-grandfather was pulled out of storage by my mother’s cousin. Among the photos were one of Caroline Worthington as well as one of James Worthington. Both photos are dated August 1891 and taken by Railway Photo Studio.

“I believe James and Caroline wrote their own name on the back of their photos as the signatures compare to a wedding document they each signed as a witness at the wedding of Caroline`s sister, Eliza,” says McMillan.

By 1891, according to Toronto census information, the Worthingtons were living in Swansea, a community in the west end of Toronto. Worthington was a successful business owner and the family lived comfortably cared for by a cook, housemaid and coachman.

Worthington died in 1898. Caroline lived in Toronto with several of her siblings until her death in 1905. There is no record that Caroline ever visited our Sudbury.

McMullan is sending copies of the photographs to the Greater Sudbury archivist Shanna Fraser.