What is Folly’s secret?

Vicki Gilhula February 26, 2019 Our Town, Sudbury's Stories No Comments on What is Folly’s secret? 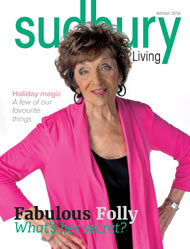 Beniamino Scagnetti made a wise decision to leave northern Italy for Canada in June 1913. He found opportunities in a booming Northern Ontario mining town. Garson was not a pretty place but it was safely thousands of miles away from erupting tensions in Europe.

Scagnetti became a community leader and an entrepreneur who owned many businesses starting with a successful general store in Garson. He and his wife, Cristina had nine children. The oldest, Mafalda, was born April 1, 1918.

Amazingly, Mafalda Scagnetti Markle, who is called Folly by her extended family and friends, celebrated her 100th birthday this year.

Her mother told her she was named after an Italian princess. (Princess Mafalda of Savoy was the beautiful second daughter of King Victor Emmanuel III.)

Folly was nine months old when the First World War ended. She was born the same year as Nelson Mandela, Rita Hayworth and Leonard Bernstein. Silent film stars Charlie Chapin and Canadian Mary Pickford were the most famous people in the world at the time.

Folly, whose parents both died in their late 70s, has outlived all her siblings except her youngest brother, Ben. He and brother Ron, are the founders of Mid-North Motors.

Life expectancy for a Canadian woman was 60 in 1918. Today the life expectancy for Canadian women is 84. In 2016 there were more than 8,000 centenarians in Canada and two-thirds were women. Thanks to healthier lifestyles, good health care and progress made in medical science, Statistics Canada predicts that number will could rise to 17,000 in 2031 and 80,000 by 2061.

Ellen Gibbs of North Bay is the oldest woman in Canada. She is 113.

Folly Markle defies aging stereotypes. She is in good health and lived independently in her own apartment until just as few years ago when she moved into a spacious light-filled apartment in Southwind Retirement Residences. She drove a car until her mid-90s.

“I have glasses but I don’t wear them. I use a magnifying glass to read the newspaper,” she says.

She doesn’t take a lot of pills and has never taken vitamins. “Maybe I should try them,” she says.

Photos of Folly taken over the years indicate she was always particular about her appearance. The petite woman is still beautifully groomed and dressed. It helps that she can rely on her niece is Benita Dellelce, owner of Charm Plus. Her mother, Diane, who died in 1994, was Folly’s younger sister.

“She likes to go out for dinner and she has a good appetite, says Dellelce.

“Folly also loves to shop. She used to get her shoes from Harry Young’s in Toronto. They specialize in women’s shoes from AAAA to C widths. She has a very long and narrow foot. The store open in 1918 but it closed a few years ago. They didn’t last as long as Aunt Folly.”

As was typical for a girl at that time, Folly left school after Grade 8 to work in the family’s general store. There she learned about business and eventually ran her own store in the Donovan.

Many of the Garson store’s customers were miners. That’s how she met her husband, Joseph, whom she married when she was 22.  He was a miner and later sold real estate. The couple had two children but later divorced.

Folly’s secret? “I feel like 50,” she says. “Everyone wants to know what my secret is. I don’t have one. My doctor just says, ‘keep doing what you are doing’.”

Her secret may be joie de vivre. When she was younger, she liked to golf and curl and still loves the sunbathing.

She made several trips to Europe, Florida and Hawaii.

Folly wears a hearing aid and often asks to have questions repeated. But her hearing issues don’t interfere with her ability to enjoy music and dancing.

Folly does not have any grandchildren but she is the matriarch of the Scagnetti family and is close to her many nieces and nephews and their children.

One hundred and eighty people attended her birthday party at the Lexington Hotel.

“Is there anything you miss from the good old days?” I ask.

“Like what?” she answered.  “I don’t miss anything from the old days. I’ve got my health. I have no worries.”