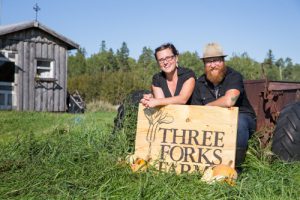 Éric Blondin and Peggy-Gene Baillie of Three Forks Farm in Warren have been farming since 2016. They were both driven by a desire to learn more about where their food came from.

Farms in Canada are getting bigger: the idyllic pastures and small family farms of the 20th century increasingly replaced by large-scale, corporate operations.

But there are some local farmers going against the grain, so to speak, and they’re working to combine old-fashioned practices with new science. Some of these farmers have put down roots in Northern Ontario, and a peek at a day in their lives reveals what it’s like to be a farmer in the 21st century.

Éric Blondin and Peggy-Gene Baillie of Three Forks Farm in Warren have been farming since 2016. They were both driven by a desire to learn more about where their food came from.

“I hve always been really passionate about food and started out my career working as a chef…when I wanted to get my chefs papers I thought I should understand the roots of food first so I did an internship on an organic farm in southern Ontario,” said Baillie. “I never turned back.”

Blondin explored careers in film and politics before realizing his passion about food, and he became the grocery manager at Eat Local Sudbury.

The couple bought a farm in 2015, and today they grow more than 40 varieties of vegetables; have pastured chickens that live in large pens that are moved every day so they get fresh grass, bugs, fresh air, and exercise; and in 2017 they started growing seed to sell to other farmers.

On a typical day in the growing season, they wake up around 6 am or earlier, turn on CBC Radio 1, and do some stretching strength-building exercises. This is followed by a healthy breakfast of coffee, homemade bread, smoothies, and eggs cooked any number of ways.

They meet early with staff to discuss the day before starting chicken chores, and then working at miscellaneous tasks (weeding, repairs, etc.) until lunch. They take an hour together to eat before starting an afternoon of more work.

The crew is done around 4 pm, but Blondin and Baillie aren’t.  Usually one of them makes dinner (while the other continues working, and then after dinner there’s often more maintenance and planning to be done before an episode of Star Trek and then bed by 10 pm.

Each day varies depending what season it is, what’s growing, or what’s broken around the farm at any given time.

In the winter, they work at crop planning and seed orders, but they start planting in their greenhouse as early as March. From May onwards, they’re busy in the fields straight through to October when they harvest and pack up their winter storage crops.

The down time they get in the winter is often spent on business development but they make time for some much-needed rest and relaxation in their sauna, and with their dogs, Doc and Hap.

Over their past few months, they’ve worked to have their farm certified organic and they describe their strategy as “a blend a lot of traditional farming and knowledge with modern approaches.”

As big believers in growing food in soil the good old fashioned way, with help from modern implements such as greenhouses to manage the changing environment, they are trying to do their part in refreshing the local food system.

JULY 4-7 FESTIVAL A CELEBRATION OF SONGWRITING