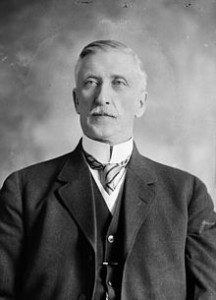 Articles that appeared in The Story of Our Times, published in 2008 are now available online under the Sudbury Stories tab on the Sudbury Living website.

Sudbury should have a monument to or a building named after Frank Cochrane. Most people might assume Sudbury’s Cochrane St. is named after the town; ironically the town and the street are named after one of this city’s first politicians.

Frank Cochrane (1852-1919) could be considered the father of Northern Ontario. He believed Northern Ontario, or Greater Ontario as he called it, had a bright future. And like future generations of northern politicians, he fought to ensure its contributions to the country‘s wealth was not taken for granted.

Cochrane was a business-man who went on to become mayor of Sudbury. He represented the area as an MPP and he served in the provincial cabinet. He also served as an MP from Northern Ontario and was a member of the federal cabinet.

Originally from Quebec, Cochrane moved from the Ottawa Valley to set up a hardware and mining supply store on Elm St. in Sudbury in 1890. The store became Cochrane Hardware. His wife and children joined him a year later.

He built the impressive Cochrane Block on the corner of Durham and Cedar. It was torn down when the Scotia tower was built.

Historian Charles Dorian wrote, “When someone remarked that his new hardware store was too big for a small town, Cochrane replied, with positive assurance, he was afraid it was too small for the big city Sudbury was going to be.”

Cochrane took advantage of the considerable business oportunities in the frontiers town. In 1929 he and prospector William McVittie founded the Wahnapitae Power Company which supplied power to Sudbury. In 1929 the Cochrane family sold its shares to the Hydro-Electric Power Commission of Ontario for more than $1 million.

Cochrane speculated in various mineral properties, the most valuable being the so-called Frood Extension, purchased in 1908 and sold to the Mond Nickel Company in 1910 for $200,000.

Cochrane’s name was on the list of community leaders who lobbied the province to incorporate Sudbury as a town in 1892. He was the first president of the board of trade (chamber of commerce).

After serving as a councillor and three terms as mayor of Sudbury, he entered provincial politics. He was acclaimed MPP for East Nipissing in a by election in 1905. He became minister of the newly created Ministry of Lands and Mines. In 1908 he was elected the first MPP for the provincial riding of Sudbury.

Cochrane attemped to secure a portion of the wealth created by mining companies for communities such as Sudbury by establishing a tax on mining profits.

His influence at Queen’s Park ensured the people in Northern Ontario had roads, railway service, access to education and settlement assistance.

He is credited with having Sudbury designated the seat of a new judicial district in 1907, and ensuring it was linked to Toronto by both the Canadian Pacific Railway and the Canadian Northern.

The Ontario government rewared the minister of Lands and Mines by naming the Town of Cochrane in his honour. Cochrane helped the federal Conservative government of Robert Borden win a majority of seats in Ontario and defeat the Liberals in 1911. Although he did not run federally that year, he was rewarded with the offer of a federal cabinet post. He resigned from the Ontario cabinet and a safe seat was found for him in Nipissing. Cochrane was given the Railways and Canals portfolio.

During this time, he encouraged the establishment of a nickel refinery in Port Colborne. Cochrane suffered from diabetes(before insulin was discovered). He retired from politics in 1917. He died at the age of 67 on Sept. 22, 1919 in Ottawa and is buried beside his son in Mount Pleasant Cemetery in Toronto.