The art of the Polaroid 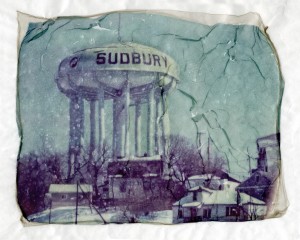 In 2008 Polaroid announced it would no longer make instant film. Digital photography had made instant cameras obsolete or so many people thought at the time.

Despite predictions, Polaroid cameras are not as dead as the dodo. A company in the Netherlands is making film for the cameras and there are approximately three million perfectly functioning classic Polaroid cameras out there.

Sudbury photographer James Ruddy has 14 of them. He became an “unintentional” collector. Some he bought while others were given to him by people who no longer used them. His favourite is the SX-70 Alpha 1 camera first introduced by Polaroid in 1972. It was ranked eighth on The Complete List of PC World’s 50 Greatest Gadgets in 2005. 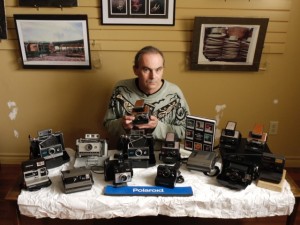 The invention of modern instant cameras is generally credited to American scientist Edwin Land who unveiled the first commercial instant camera, the Land Camera, in 1948. In 1974, an estimated billion Polaroid photographs were taken and a few years later the company enjoyed a billion dollars in sales. Fujifilm and Kodak also made instant cameras and film. (Kodak was forced out of the instant camera business when Polaroid won its case for patent infringement.)

Instant photography was popular with amateurs as well as artists such as Ansel Adams, David Hockney and Andy Warhol. It was also used in the advertising and film industries to set up shots. Police investigators used instant film to ensure an evidence photograph was not doctored.

About 20 years ago, Ruddy started to experiment with a neglected Polaroid camera that had belonged to his parents. He started experimenting with Polaroid manipulation techniques.

The exposed instant film is scratched with a pen or stick when it comes out of the camera. This results in a blurry artistic effect. Ruddy scans these images into his computer and makes enlargements. His prints and art cards are available at Artists on Elgin and his work has been featured previously in Sudbury Living.

“It has unleashed a more creative side of photography in me. Before I just replicated what I saw in front of me.

“I found the colour is not always true to what I was photographing. I use it for artistic purposes and I enjoy that. It is sort of a gamble but an interesting one. It can be difficult to predict results with Polaroid film. The colour is never true in my opinion.”

“The Polaroid look” with its distinct white frame is very popular these days and is used in many fashion and art magazines. There is software that can turn a digital photo into a Polaroid.

Another type of Polaroid art is known as emulsion lifts. Hot water is used to lift the top emulsion off of the backing paper. The image of the thin film in than placed (printed) on paper or another surface.

Like other Polaroid enthusiasts, he stockpiled film before Polaroid stopped making it. His uses the SX-70 Alpha 1 (circa) 1977.

Time Zero, The Last Year of Polaroid Film is an enlightening documentary made in 2012 about the Polaroid camera and the photographers who continue to use instant film. It also takes a look at the Impossible Project in Netherlands. This is the company that began to make film for Polaroid cameras despite challenges which included not being able to purchase obsolete chemicals used in the developing process.

“There is something tactile about a Polaroid photograph that people still enjoy,” says Ruddy.

In recent years, Fujifilm has attempted to attract a new youthful market with its Instax Mini 8 cameras and the Instax Wide 300. The latter takes an instant photograph that is 86 x 108 mm (3 x 4 inches).

Is it the flu or a common cold?

Canadians heading south for the holidays