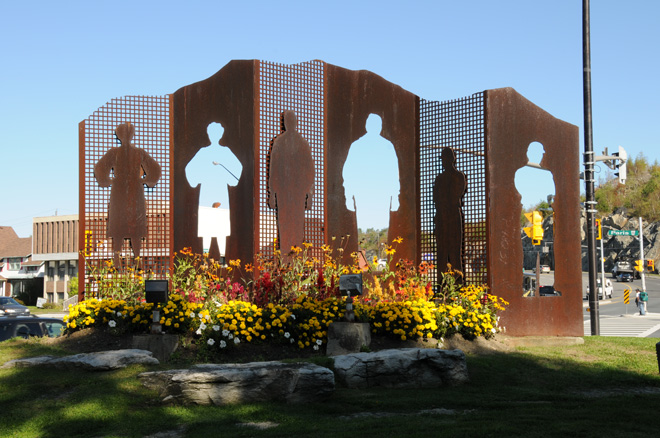 Sudbury doesn’t have a lot of public art but it has at least one piece that is worth bragging about. The Spirit of ’83, located at the corner of Paris and Brady streets, is the work of Canadian contemporary sculptor Colette Whiten.

The English-born artist won the international competition for public art to celebrate the 100th anniversary of the founding of Sudbury. The competition was sponsored by the Sudbury Chamber of Commerce in 1983 and unveiled in November 1984.

The business association raised $65,000 for the people sculpture which consists of industrially produced screens of self-rusting steel and incorporates cut-out and solid life-size figures.

The sculpture “is the most successful example of Whiten’s method of using cut-out silhouettes of and for a participating public,” Gunta Lambton wrote in the book, Stealing the Show, seven women artists in Canadian public art (1994).

“The silhouettes of “immortalized” Sudbury citizens, inviting the participation of the public of the future, allow quite remarkable vistas through human-shaped windows of bright new buildings, newly planted trees, the new town of Sudbury replacing the old, known once for its dreary, desolate ugliness,” wrote Lambton.

“Whiten’s human models participated in the creation of her sculpture by the imprint of their own bodies. The memories of this event are added to the tactile, mimetic, and kinetic responses evoked by the life-size replicas of the human body.”

The sculpture met the requirements of the chair of the chamber committee to “create a link between the human and the physical landscape.”

Although most people refer to the sculpture as belonging to the Sudbury Theatre Centre, it was installed by the chamber of commerce on public property next to the hydro transmission station.

A few years after creating Spirit of ’83, Whiten, a professor at the Ontario College of Art & Design in Toronto, collaborated with Paul Kipps to create Olympic Arch in Calgary. It was placed at the entrance of Olympic Game Athlete’s Village. Today it welcomes students to the University of Calgary’s physical education complex.

Her work is in the collections of the National Gallery of Canada in Ottawa, the Vancouver Art Gallery, Carleton University Art Gallery and Concordia University in Montreal.
Whiten has had numerous solo and group shows in Canada and around the world. She is represented by the Susan Hobbs Gallery in Toronto.