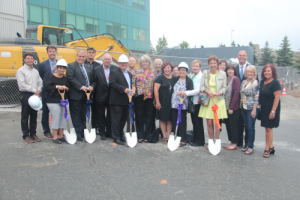 Committee to get Sudbury a PET Scanner was formed after Sam Bruno’s death.

After more than a decade of lobbying and fundraising, the late Sam Bruno’s dream of a PET scanner for northeastern Ontario has finally come true.

Now the purpose-built suite overlooking Lily Creek at Health Sciences North’s Ramsey Lake Health Centre that houses the piece of diagnostic equipment he and his family fought so hard for has been named in his memory.

A ceremony at the hospital Wednesday morning marked the official opening of the new “Sam Bruno PET Scanner Suite.”

In celebration, Sam’s brother Frank Bruno led those at the event in a toast with glasses of sambuca, an anise-flavoured Italian liqueur.

Sam — who was of Italian heritage, hence the sambuca — “lobbied a lot of people over the table with a little drink of sambuca,” said Frank Bruno.

It was 11 years ago while undergoing cancer treatment that Sam Bruno made a complaint to the Ontario ombudsman that PET scans — a nuclear medicine imaging test — were not a fully insured service in the province. At the time, they were only used in limited clinical trials.

When PET scans were later covered under OHIP for everyone who needed them, Bruno, who’d had two PET scans in Southern Ontario during the course of his illness, made it his mission to bring one of the machines to northeastern Ontario.

Northeastern Ontario was, until recently, the only area of the province that did not have its own PET scanner.

Sam passed away from colorectal cancer at the age of 55 on July 15, 2010, but his family set up the Sam Bruno PET Steering Committee to make his dream come true.

Communities across the northeast eventually contributed $4.3 million to the project.

The Ministry of Health and Long Term Care provided $4.6 million toward construction costs for the PET suite and up to $1.6 million in annual operating funding.

Sam Bruno exemplified how “if you had enough time and enough willpower and determination” someone could “move a mountain” or “chop down a tree with a spoon,” said Frank Bruno during his comments at the ceremony.

It seems Frank himself is capable of channeling his brother’s fierce determination in fighting for what he believes in.

Once he even missed his plane after spotting Eric Hoskins, Health and Long-Term Care Minister under the former Liberal government in Ontario, at the airport, and cornering him at the shoe-shine station to lobby him about the PET scanner.

Fortunately, he found an attentive ear. “It really was then that we really started to see things move,” Frank said.

“For our family, today is the end of Sam’s journey and our journey,” he added.

“He can finally rest and we can finally move forward, knowing that while this is the end of our journey, it’s only the beginning for so many others that have cancer diagnosis.

“We are hopeful the battle Sam won will help others improve their odds of survival and improve the quality of their care. This is a huge win for the people of the northeast.”

Brenda Tessaro, another key member of the PET steering committee, issued a few thank yous in her remarks.