Giant hogweed is big and bad. It’s sap can cause blisters on skin

Sudbury Living Magazine July 6, 2016 Home & Garden No Comments on Giant hogweed is big and bad. It’s sap can cause blisters on skin 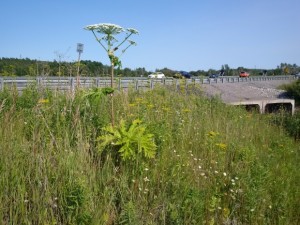 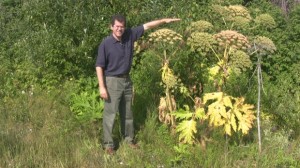 The City of Greater Sudbury launched an aggressive campaign to identify locations of invasive species in order to eradicate them.

No, invasive species aren’t from outer space. They are species of plants and animals that are introduced to new areas, usually by humans. Some are very aggressive spreaders, whether on land or in water.

Giant hogweed is an example of a relatively recent invader that grows on land. Originally from Europe and parts of Asia, giant hogweed was introduced to North America as a garden novelty because of its large size. Hogweed can develop into large colonies that exclude native plants and can lead to nasty blisters in humans if skin is exposed to both the plant’s sap and sunshine. Usually growing anywhere from 1.5 to 2.5 metres high in Greater Sudbury, giant hogweed was likely introduced here at least a few decades ago.

Starting in 2011, the City of Greater Sudbury launched an aggressive campaign to identify locations where this plant was growing and treat the plants in attempts to eradicate it from our municipality. With the help of the local community, several hogweed hot spots were identified and treated. The City is actively monitoring the hot spots and retreating as necessary. Large colonies can take several years to eradicate.

Other recent land-based invasive plants in our city include the Japanese knotweed and Himalayan balsam. To help prevent the spread of invasive terrestrial plants, please:

So far there are only two aquatic invasive species in our city. The Eurasian Water-milfoil is a plant that’s native to Europe and parts of Asia. It is believed to have been introduced in North America through ships emptying their ballasts in the Great Lakes. It is rapidly spreading from lake to lake in the United States and Canada. We now find this plant in 18 lakes in Greater Sudbury. It grows quickly and can create a thick mat that makes swimming or boating very unpleasant. By floating near the water surface, milfoil blocks light from reaching lower levels near the shoreline making it difficult for native aquatic plants to take hold, thrive and compete with the milfoil. The spiny water-flea is a small invasive invertebrate that affects two of our local lakes so far: Lake Nepahwin and Lake Penage. It can rapidly change the aquatic ecology of lake and disrupt native fish populations.

Enjoy boating on local lakes but remember to properly clean your boat before you move your watercraft to a new lake or let it dry in the sun for at least five days.