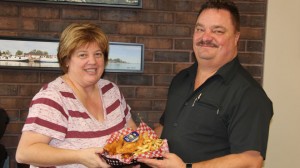 Reprinted from Northern Life/ November 2013
The red-and-white Herbert Fisheries fish and chips bus in Killarney, Ont. is a popular destination for day-tripping Sudburians. But with renovations ongoing at their Killarney dockside location, Herbert Fisheries owners Ross and Jenny Herbert decided to open up a new restaurant at 1942 Regent St., in the city’s South End.It may be a different setting, but the lightly-battered fried fish freshly caught by the Herberts in Georgian Bay and the golden, crispy fries are the same. So far the new restaurant, which opened Nov. 1, is a hit with customers.“It’s only our second day, but from the folks that are coming in, it’s a really good response,” Ross said. “It seems like they’re liking it, and if it keeps working the way it is, I think we’ll be here for awhile.”Given that Herbert Fisheries normally only operates until October, customers are excited they’re now able to get their fish and chips year-round, Jenny said.Ross said he’s planning to fish up until December, and is stocking his freezer so there will be enough to get the restaurant through until he can put his boat in the water again.Until freeze-up, people are also able to purchase fresh and smoked fish from the Regent Street location on Fridays and Saturdays. Frozen fish is also available.

The Herberts decided to open the Sudbury restaurant to keep their income flowing as they rebuild their Killarney operation. They recently demolished their old fish house, which needed to be modernized and brought up to specifications.

A new fish house is due to be constructed, and will incorporate a 30-seat restaurant, although there will still be picnic tables on the dock, which has always been popular with customers.

The new building will look something like a building on Canada’s East Coast, Ross said.

Sadly, the red-and-white fish and chip bus will no longer be used. Ross said people took photos as the Killarney icon was towed away last month. It’s now sitting on a piece of property owned by the Herberts.

But the new Killarney restaurant will pay homage to the business’ roots — it’ll have a red-and-white colour scheme, and the Herberts are planning to install take-out windows reminiscent of the bus as well.

Nothing more Canadian than Maple Syrup