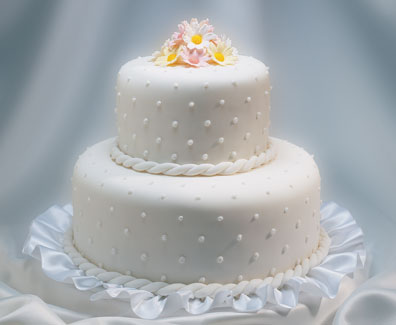 Queen Victoria’s wedding cake was reportedly nine feet in circumference, weighed 300 pounds and started the trend for cake toppers depicting the bride and groom. In 2007 two pieces of that cake, stored in little boxes, were put on exhibit at Windsor Castle.

Victoria started the white wedding tradition in 1840. Not only did was she the first royal bride to wear a white dress, her multi-tiered wedding cake was frosted with white “royal” frosting that thick, hard, matte icing that has been known to break a tooth or two.

And while white wedding cakes still are the most popular choice, today’s bride and groom can have any kind and colour of cake they want. Chocolate, spice or carrot cakes are popular with icing often coloured to match the wedding decor. Buttercream icing is currently the rage.

Fruit cake is a custom that comes from the British Isles. The official wedding cake served at the wedding of Prince Charles and Princess Diana was a five-foot tiered fruit cake covered with white royal icing. Fruit cake (also called groom’s cake) stayed fresher longer than other cakes. It can be easily wrapped and packaged in tiny boxes to give to guests to take home, but this is a tradition is no longer always followed.

Back in the 17th century, and well into the early 19th century, a bride’s pie served at weddings. It was usually a mince pie, or may have originally been a mutton pie. A glass ring was hidden in the pie and an old adage claimed the lady who found a glass ring would be the next to be married.

A couple of years ago, a 138-year-old slice of cake from the marriage of Princess Louise, daughter of Queen Victoria, and the Marquis of Lorne, a future governor general of Canada, went on sale at auction. The asking price was $215.

Princess Louise’s wedding cake stood five feet from its base to the top tier, weighed over 225 pounds and was finished in white icing. It was elaborately decorated by the Queen’s chief confectioner and took three months to make. The base embellished with white satin bearing the coats of arms of the bride and groom.

Bride and groom toppers began to fall out of vogue in the 1960s-Jacqueline and John Kennedy’s wedding cake was topped with flowers. Brides usually are inspired by the latest celebrity or royal wedding. Guests at the wedding of Tom Cruise and Katie Holmes enjoyed a five-tier white chocolate mousse wedding cake studded with white chocolate chips and adorned with marzipan roses. Chelsea Clinton ordered a $12,000 gluten-free cake for her wedding last summer.

The cutting of the wedding cake is part of a traditional wedding celebration. It symbolizes the first task a bride and groom perform jointly as husband and wife. The first piece of cake is cut by the bride with the “help” of the groom. Some brides feed the first piece to her groom, but there is a fertility superstition that suggests the bride should cut and eat the first piece. Many couples freeze a tier of cake to share on their first wedding anniversary or at the christening of their first child.

Wedding cakes are available in all shapes, sizes and price ranges. This may be an area where a friend can help out by making the cake. Some couples use a “dummy” cake for photographs and serve individual cupcakes to guests.

One of the many wedding superstitions is that the bride must not make her own cake, or she will be doomed to work hard for the rest of her life. Another superstition is that an unmarried woman wil dream of her future husband if she sleeps on a piece of wedding cake…or cupcake!

When Princess Elizabeth married Lieutenant Philip Mountbatten in 1947, their wedding cake was made by McVitie and Price with“rationed” ingredients sent by the Girl Guides, Rangers, and Brownies of Australia. The cake had four tiers supported by silver pillars, stood nine feet high and weighed 500 pounds. The cake was decorated with armorial bearings of the bride and groom, and depicted scenes from their lives on the bottom two tiers.