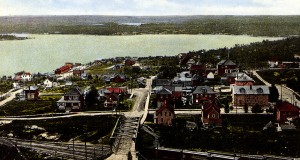 Kelly Nootchtai is now known in her home community of Atikmakesheng Anishnawbek, an Aboriginal reserve located near Naughton, as the “Maclean’s cover girl.” The 20-year-old, third-year Laurentian University philosophy and native studies double major is featured on the cover of Maclean’s magazine’s 2011 university rankings edition, which was released last week. She is one of [...]