Sudbury Living Magazine July 10, 2019 Arts No Comments on The Story of Yes 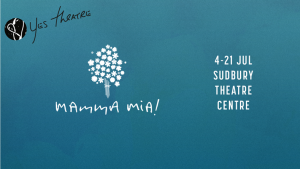 Update: The run of YES Theatre’s production of “Mamma Mia!” has been extended by one week to July 28.

YES Theatre is celebrating its 10th season this summer. The talented and enthusiastic theatre company will present Mama Mia featuring the music of ABBA from July 5 to July 21 at the Sudbury Theatre Centre.

Alessandro Costantini, who has lived, eaten and slept theatre since he was a teenager, launched YES (Youth Entertaining Sudbury), a hybrid of professional and community theatre in 2010.

Still, this summer YES will be operating on an impressive budget of $500,000. Sold-out performances help pay the bills as do grants and sponsorships.

Costantini is still involved with YES although he has to do much of the organizing from Toronto where he is starting in super successful Dear Evan Hansen at the Royal Alexandra Theatre. He was recently nominated for a Dora Award for best performance in a featured role.

Mamma Mia is directed by Fiona Sauder, with choreography by Janie Pinard and musical direction by Stephan Ermel.

Tickets for Mama Mia, and James and the Giant Peach which opens in August, are available at One Sky on Durham St., by phoning 705.929.9292, or visiting the YES website.

Mickey Rooney and Judy Garland decided the best way to solve a problem in the movie Babes in Arms was, “Let’s put on a show!” Seventy years later, Sudbury’s Alessandro Costantini  solved his problem in the same way.

“When I was in high school, I wanted to do shows like Hair but I knew there would be no way to get approval at that time, so I figured that with all the talented kids in Sudbury, we could produce outside the school system.”

And so, the birth of YES Theatre (Youth Entertaining Sudbury).  Costantini, then 16, grabbed his briefcase, visited Mayor John Rodriguez, gaining the city support he needed. And, as they say, the rest is history.

“I know now that this is exactly what I am supposed to be doing,” Costantini affirms.

He is no longer a high school student, but a twentysomething professional Equity actor, a graduate of George Brown Theatre School, and a seasoned actor, director and producer.

“When I was 16, I didn’t know what I was getting into.” That’s the power of youth, the gift of naïveté, the inability to imagine one can’t succeed.

“We did it! Hair sold out (at the Sudbury Theatre Centre). Closing night was one of the most joyous moments of my life. I’ll never forget it.”

As the curtain came down, everyone began asking, “What’s next?”

Costantini, who is a St. Charles College graduate, had only imagined one show. He didn’t have an answer then but Hair spawned one of the most exciting theatre companies in the north. With the support of family, friends and community, Costantini bit the bullet and selected the rock musical Rent for season 2.

“At that time, I didn’t know what failing was; it really didn’t exist for me. I guess we got lucky or maybe it was fate.”

It’s sometimes difficult to know if YES Theatre is Costantini or if it exists outside him, the two are so inextricably linked. Consistently, his casts are strong and passionate, every moment of every performance of every show. You can feel the love.

Costantini is fiercely committed to the company he calls “family” and is proud of all six seasons. Some shows have been commercially more successful than others, that’s a given, but all have been artistically riveting.

Houses were packed for shows such as Jesus Christ Superstar and Fiddler on the Roof.

“We were prepared to take financial risks with shows like In the Heights and American Idiot.”

Our contribution to the Sudbury economy last season was about $650,000…We’d love to grow, get some paid staff, pay artists more…”

(Reminder: Costantini is in his early 20s.)

Can this young man put his own career on hold for YES Theatre?

“It’s not a theatre company I can ever walk away from. It’s part of me and part of the community I love. It will find a way to survive and thrive, even if I’m on hiatus.

Everyone seems to look at me like I’m the dad of the company, and dads take care of their families.”

This August, YES Theatre presents the Tony Award-winning Hairspray with the April Perrin in the lead.

“April has been with us since Spring Awakening. She has grown remarkably over the years and is currently at the top of her theatre class.

There is no one I can think of that captures the essence of the lead character Tracy Turnblad like April Perrin.”

In Toronto, when Costantini told Perrin she had earned the role, April broke down and cried. She had scored the perfect role.

Perrin, 21, a graduate of Sudbury Secondary’s drama program, has been consistently mesmerizing on stage whether at SSS, with the Young(ish) Company at Sudbury Theatre Centre or with YES Theatre.

“She sings, she dances, she acts…she’s amazing. It feels good to have an artist like her leading the cast.” 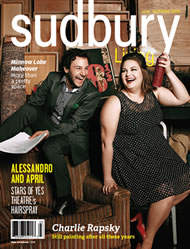 As Perrin says, “I’ve wanted to play Tracy ever since I first saw the musical. I can’t believe I’m getting my dream role. Tracy’s a fighter who loves who she is and she isn’t going to change. I’m excited for the whole experience: the character, the creative team, and the company. The music’s so fun and catchy, everyone will want to sing along out loud.”

Perrin got a callback at an open audition for NBC’s Hairspray Live in New York City this spring. More than 1,000 young actresses lined up outside the theatre for a chance to audition to play Tracy.

Hairspray, set in 1960s Baltimore, plays Aug. 12 to 27.  Tickets are available at the Sudbury Theatre Centre box office, by phone, on line or in person.  There is a range of prices including rush tickets.

What’s in the future for YES Theatre? How about Billy Elliot? How about a fresh new script written by Costantini and developed by the company? How about a 10th season surprise that is too big to divulge?

We can all play our part by supporting YES fundraisers, by donating to the company and by buying tickets.  YES Theatre will do the rest.

Giving thanks for pumpkin cheesecake

Jack-O-Laterns are good to eat