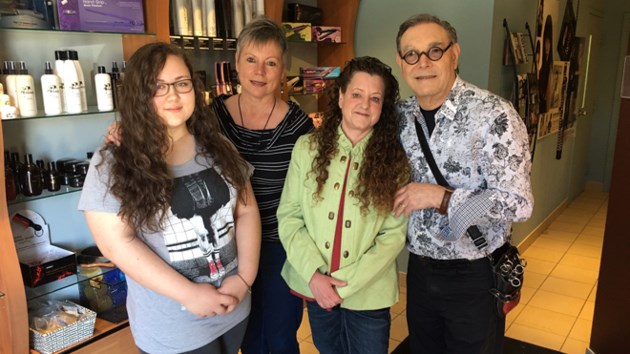 Hair was hitting the floor fast and furious at A Touch of Class Hair Salon April 20 as Stephanie Greco and Hannah Bellmore prepared to donate their hair and pledges towards local cancer research.

The funds were raised for Trust Your Bust, a Northern Cancer Foundation fund that raises breast cancer awareness and helps support breast cancer research at the Advanced Medical Research Institute of Canada.

Kimberley Wahamaa, founder of Trust Your Bust, is a breast cancer survivor and knows what it’s like to have the shortest hair imaginable – none.

“In a lot of cases for women, the thought of losing your hair is as scary or even more so than the cancer treatment itself,” said Wahamaa. “ ‘How Much Hair Do You Need?’ was an idea we came up with to show that whether you have hair down to your waist or none at all, you’re still here with us and you’re still a fighter.”

Bellmore and Greco both had their minds set on getting their hair cut for one reason and one reason only – to donate it.

“This is my second time donating my hair,” said Bellmore. “My grandfather passed away with cancer and I wanted to do something in his honour.”

Greco, a radiation technologist at Health Sciences North, has been growing her hair for eight years.

“Cancer touches everyone, everybody has their own story,” she said. “I lost a close friend because of cancer. I hope that getting my hair cut shows cancer patients that it’s not a big deal. At the end of the day, hair is nothing.”

The pair raised $1,275 in pledges to go along with the hair donation.

“The Northern Cancer Foundation would like to thank Hannah and Stephanie for their hard work raising money and having their hair cut and Frank Marasco at A Touch of Class Hair Salon for cutting and custom styling Hannah and Stephanie’s hair,” said a press release.